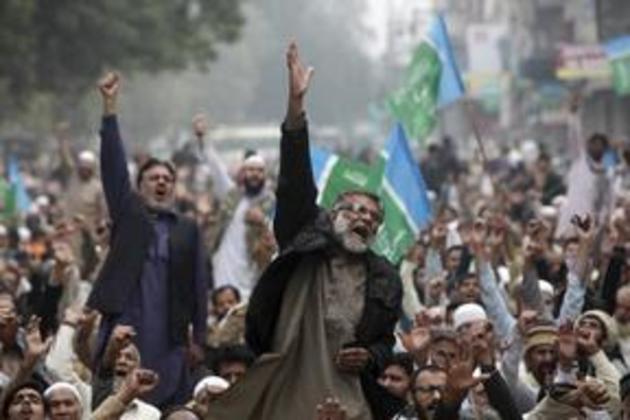 In a recent op-ed, Toby Cadman, an international lobbyist for Jamaat-e-Islami, suggests that it is a “mischaracterization” to suggest that Jamaat-e-Islami is “an extremist group that is involved in acts of terror,” instead downplaying the group as “a conservative Islamic political party in opposition.” This is an important question, not for only for those who wish to better understand Bangladesh’s political landscape, but for those interested in successfully disrupting, dismantling and defeating the networks of violent extremist groups that operate in South Asia.

Before we examine whether Jamaat-e-Islami meets the definition of a violent extremist group, we need to have a working definition of violent extremism. This is where confusion most often sets in. Recently, in Pakistan, for example, former military dictator Gen. Pervez Musharraf said in a television interview that Lashkar-e-Taiba leader Hafiz Muhammad Saeed is not a terrorist, but a “mujahid” – an Islamic holy warrior.

Hafiz Saeed is not a terrorist but a mujahid. Jud n Let help us fight indian troops in Kashmir. I myself regret banning them n now oppose the ban by Govt of Pakistan. Hafiz Saeed should also be allowed to participate in Pakistani politics … Musharraf#11thHour pic.twitter.com/RoaQkP2KpG

In fact, Hafiz Saeed and his various organizations were designated terrorist groups by the United Nations a decade ago. To avoid this type of semantic confusion, we will use the FBI’s definition of “violent extremism.” The FBI defines “violent extremism” as “encouraging, condoning, justifying, or supporting the commission of a violent act to achieve political, ideological, religious, social, or economic goals.”

IS JAMAAT-E-ISLAMI AN EXTREMIST GROUP?

Mr. Cadman contends that Jamaat-e-Islami is “a conservative political party in opposition.” While he is not incorrect, this characterization does not sufficiently explain just what Jamaat-e-Islami is. Jamaat-e-Islami, for example, is not a Bangladeshi organization. Jamaat-e-Islami was founded in 1941 in India by the fundamentalist Islamist philosopher Abul Ala Maududi, and has active chapters in India, Pakistan, and Bangladesh. In his 1939 speech, Jihad in Islam, Maulana Maududi laid clear the objective of his ideology:

But the truth is that Islam is not the name of a ‘Religion’, nor is ‘Muslim’ the title of a ‘Nation’. In reality Islam is a revolutionary ideology and programme which seeks to alter the social order of the whole world and rebuild it in conformity with its own tenets and ideals. ‘Muslim’ is the title of that International Revolutionary Party organized by Islam to carry into effect its revolutionary programme. And ‘Jihād’ refers to that revolutionary struggle and utmost exertion which the Islamic Party brings into play to achieve this objective.

He goes on to explain:

Islam wishes to destroy all states and governments anywhere on the face of the earth which are opposed to the ideology and programme of Islam regardless of the country or the Nation which rules it. The purpose of Islam is to set up a state on the basis of its own ideology and programme, regardless of which nation assumes the role of the standard-bearer of Islam or the rule of which nation is undermined in the process of the establishment of an ideological Islamic State. Islam requires the earth—not just a portion, but the whole planet…

Jamaat-e-Islami’s guiding ideology and it’s goal of establishing a global theocracy have not changed from Maulana Maududi’s original vision.
In 2005, Bangladeshi Jamaat-e-Islami leader Mir Quasem Ali addressed an assembly of Islami Chhatra Shibir, Jamaat’s “student wing,” during which he predicted the re-establishment of an Islamist Caliphate (Khilafat Ala Minhaj e Nabuwat) and called on Chhatra Shibir members to be frontline soldiers in bringing about the end of “heathen Western civilization.”

Jamaat-e-Islami’s goal of forcibly transforming the world to meet their vision of a so-called “Islamic State” was echoed again in 2016 by the head of Jamaat-e-Islami’s branch in Pakistan. While saying funeral prayers for the terrorist convicted of assassinating Punjab Governor Salmaan Taseer, Jamaat-e-Islami’s Sirajul Haq prayed for Allah to grant Jamaat-e-Islami the power to enforce Shariah across the globe, and declared that he and his supporters are “ready to sacrifice our lives.”

DOES JAMAAT-E-ISLAMI ENGAGE IN VIOLENCE?

Jamaat-e-Islami’s penchant for violence was perhaps best exhibited during Bangladesh’s 1971 war of independence, when Jamaat-e-Islami was enlisted by the Pakistan Army to serve as militant proxies. But this is by no means the only example. Nor is violence merely a reaction to political repression, as Jamaat-e-Islami advocates like to suggest. In fact, it has been a key tactic of Jamaat-e-Islami’s for decades.

Evidence is emerging that the oppression of minorities is becoming systematic. Bangladesh, which is 85% Muslim but has a long tradition of tolerance to religious minorities, is, say local organisations, being pushed towards fundamentalism by the Jamaat-e-Islami, which is growing rapidly in rural areas with the deepest poverty and runs two key ministries.

“This is like a silent revolution. We are returning to the dark ages,” a leading lawyer said, asking not to be named.

“I think the backdrop is being created for the introduction of strict sharia laws. You see extremist rightwing fundamentalists infiltrating every professional area, in the appointment of the judiciary, the law, medicine and in education. They are capturing key positions in government, the universities and institutions.”

These attacks have continued since voters removed Jamaat-e-Islami and its political partners from power.

In 2013, Hindus in Bangladesh were targeted in wave of violent attacks that vandalized their temples, burned down their homes, and destroyed their shops. According to Amnesty International, survivors told them that the attackers were organized by Jamaat-e-Islami and its youth wing, Chhatra Shibir.

Jamaat-e-Islami’s violence, unfortunately, continues. A few months ago, Jamaat-e-Islami carried out a campaign of arson attacks targeting Hindu homes, according to police. Meanwhile, in Pakistan, Jamaat-e-Islami has been linked to al Qaeda  and has played a key role in both the Afghan jihad and Kashmir jihad.

It is not incorrect to say that Jamaat-e-Islami is a “political party” where they are registered as such. However, that is no more accurate a description of the organization than it would be to refer to an entire person as “an arm.” In reality, Jamaat-e-Islami is a transnational organization with an agenda of replacing democracy with their vision of a theocratic Islamic state. They pursue this agenda by exploiting legal and democratic processes with the intention of undermining and ultimately removing them, and they encourage, condone, justify and support the commission of violent acts to achieve their political, ideological, religious, and social goals – the very definition of violent extremism.